Well it certainly wasn’t First On Race Day a couple of Sundays ago.

My wife and I pulled up the drive to my parents place and spotted them having a somewhat heated discussion over the bonnet of Mums new Ford Focus.

Well, new to Mum, the car is two years old with only 30k on the clock.

I’m not knocking Ford’s, geez, we have owned enough of them. From MkII Cortina’s, X series Falcons, B series XR8’s with a couple of Courier utes and 3 Focus’s to boot.

Yeah, my parents live in the southern hemisphere. Up here in the northern part of the world you don’t find many Falcons and an XR8 would be rarer. Pity!

However, Dad was really pissed about something with the car. And it was clearly apparent he thought it was the cars fault as the words …”goddamned piece of junk” echoed around the back yard.

Before I could even get out a ‘Hi, what’s up?’ Dad, pointing at the bonnet said “What do you see?”

From where I was standing I saw a silver hatchback Ford Focus.
I certainly did not reply with that obvious answer. Had I, I may have worn a wet towel to the face. The one Dad was holding.

PUTTING LIGHT ON THE SCENE

Standing next to Dad and looking at the bonnet, because obviously that was what he wanted me to look at, I still was not sure what I was supposed to be seeing.

Moving from beside him to the front of the car, removed my shadow and allowed direct sunlight on to the bonnet.

Like a rainbow after a spring shower has passed, I could see them clearly – light scratches that with the sun on them gave the appearance of ever increasing circles.

Swirl marks, holograms, spider webs whatever you want to call them. Essentially light scratches in the paint.

“Well, how are you going to fix them?” was the next thing I was hearing.

My mother taking cue with Dad’s interest in what I had to say, took Rosi inside to make morning tea.

My first thoughts were “I’m on holiday, this has nothing to do with me” as my defensive mechanism kicked in.

But come on, how many of us can do that to our parents. Well I can’t, couldn’t – whatever.

There was no sense retaliating with a negative answer, that would just push Dad’s temp gauge higher.

WHEN YOU FIRST NOTICE THOSE DESPICABLE SCRATCHES

Some common instances when we first notice minor damage to the paint of our cars.

Once you have calmed down and reassured yourself that the paint damage is not the end of the world (I have met a few people that have thought it was) take a step back and consider what may have caused it and what if anything you can do to prevent further instances.

Some Common Causes are:

Rubbing/touching on the paint when its dirty

Leaning on the paintwork with coarse materials like Denim

Overgrown trees and bushes on driveways

If you don’t already have these go and get them:

(I ‘ll even make it easy for you and add links to Amazon, Cleanyourcar & Meguiars)

What ever your favourite car care brand is use their products if you don’t have one that’s ok the products I will mention are Meguiars. Most people recognise the name and the products are very good.

This can be done at home by you using the products you have or I have mentioned. It can also be done at a carwash that does not use brushes or get a valet to do it.

I know what it’s like to live in an apartment and have no where to wash your car. Just make sure when you return from the carwash to let the car cool and try to keep it out of the sun.

If you can wash your car at home I consider a pressure washer an essential tool to the washing routine. However I know these things are expensive and that is why it’s on the optional list. (There are cheaper ones than the one I mention. A good pressure washer has 3 things – High pressure output, preferably adjustable. Water volume – flow rate. A long pressure hose).

If you have a pressure washer, attach the foam lance and mix up the correct ratio of Meguiar’s Hyper Wash (snow foam) in the bottle.

Spray the foam all over the car and let it sit for 5 minutes before rinsing off.

– Not using a pressure washer. With your hose squirt the car all over and try to remove any heavy build up of dirt. Do Not rub it.

What I do when there is no pressure washer and it is a little bit contentious, however it’s worked well for me. Wash the car with dishwashing liquid, I use Fairy. Basically dish liquid is an alkali and has the ability to lift and remove grease, oil, grime and wax.

In the bucket make up a soap solution using NXT Generation car wash or the shampoo of your choice.

Wash the car using a Microfibre or Wool wash mitt. Rinse the mitt everytime before putting it back into the bucket of shampoo. You can use the 2 bucket method or rinse it with the hose.

Do Not wash your wheels with the wash mitt!

Dry the car down using Microfiber towels. Try dab instead of wipe.

With your car clean, did anymore marks show up?

If you have opted to clay rub your car now is the time to do it.

Clay rubbing removes a lot more surface contaminants than any suds washing will do. 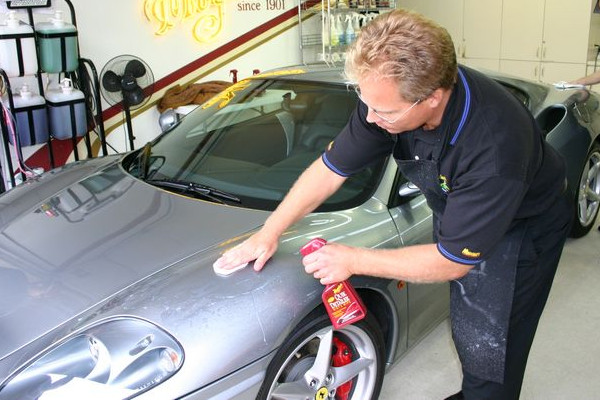 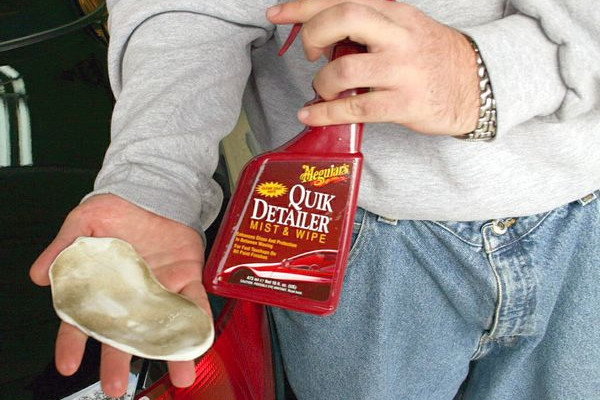 Hopefully you did not discover any other blemishes in your car paint.

If you only have one or two small scratches or marks from bugs or bird droppings you will probably be able to fix it by hand.

If you are looking remove a large area of swirl marks or marring in the paint you really need to be using a dual action (DA) polisher.

Having said that it is possible to remove them by hand – it will take time and a lot of effort.
To prove it can be done look at the photos below. That was achieved by hand polishing. 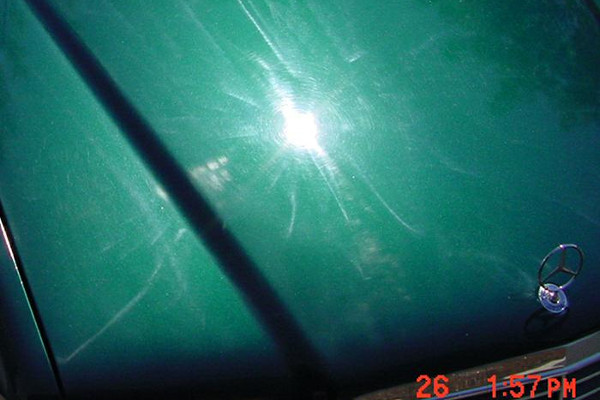 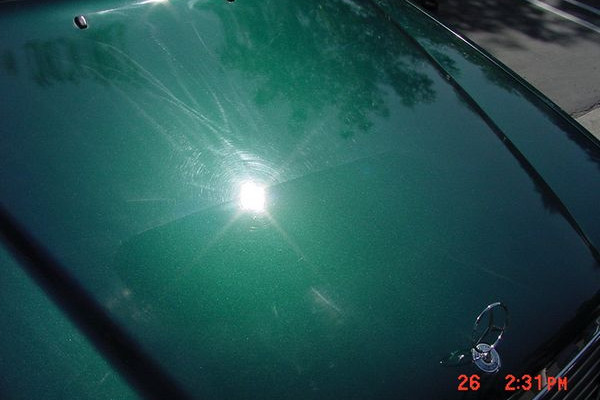 The polish used to obtain that result was Meguiars Scratch X. I have recommended you use Ultimate Compound. (Note there are coarser polishes/cutting compounds but ….. using them without experience runs a high risk of further paint damage)

Using a foam applicator pad and Meguiars Ultimate Compound, apply a small amount of the compound to the the damaged area.

Work the polish into the paint using circular or inline motions, it really makes no difference, though some will tell you otherwise. The main idea is to cover the area you are polishing evenly.

It is easier to do circular motions.

Rub the Ultimate Compound into the paint until there is none left. Wipe over the area with a clean microfibre cloth and inspect. I’m almost positive you will have to repeat 2 – 3 times before you achieve the results you want.

If you are dealing with swirl marks treat areas in small blocks – 30 cm x 30 cm approx.

You will now see a clear difference between the paint you have polished and the rest. Like the above photos.

If you really want to get results from your work with your car paint then a machine polisher will certainly raise the bar a notch or two.

Not only will a machine polisher remove the marks and minor damage in your paint quicker and more easily but it will also enhance the gloss finish, quite possibly to the best it’s ever been.

The polishers you may have seen professional detailers or paint shops use are Rotary Polishers.
Rotary polishers in inexperienced hands can do more damage than repair. A fair amount of practice is required to master a rotary polisher.

A Dual Action Polisher on the other hand requires little to no experience to achieve great results.

Which is why they are so popular with DIY car guys.

Apart from rotating, the pad also oscillates (like an orbital sander), thus reducing the amount of heat generated between the pad and paint work.

BEFORE APPLYING THE POLISH

Most machine polishers have a speed control giving a working range between 2500 – 7500 opm (oscillations per minute).

Meguiar’s have taken away the guess work and given you the speeds they recommend for the Ultimate series polishes. See below… 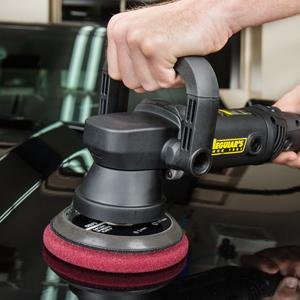 B. Set your Polisher speed to 5800 OPM. Work in a 2 x 2 feet section and apply 3-4 overlapping passes using moderate pressure, moving the pad slowly across the paint. Repeat if needed to remove stubborn defects. (Do not allow product to dry.) 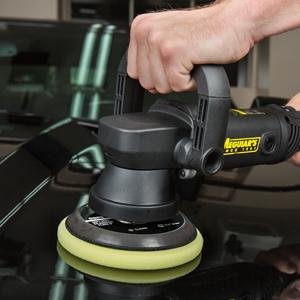 B. Set your Polisher speed to 4800 OPM. Work in a 2 x 2 feet section and apply 2 – 3 overlapping passes using moderate pressure. (Do not allow product to dry.) 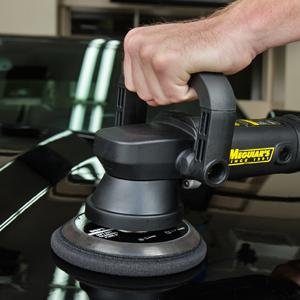 B. Set your Polisher speed to 3800 OPM. Apply 2 overlapping passes using light pressure. Apply more wax as needed until all painted surfaces of the vehicle are covered in a thin uniform coat.

PREVENTION IS BETTER THAN CURE

There are countless ways to inflict paint scratches and many can be preventable.

Never ever go through a carwash where brushes or rollers touch the car paint.

Use the 2 bucket method*

Dry off with microfibre towels

Don’t lean on your car or let anyone else

Don’t write or draw in the dirt on your car

* Personally 2 buckets is a P.I.T.A I prefer to rinse the mitt with the hose before going back into the soap bucket

Not an exhaustive list but I hope you see that by doing those small things your car paint is going to appreciate it.

THE FINAL ONCE OVER

Now that you have removed those annoying scratches/blemishes/swirls, given your car a polish and wax, I hope you are feeling alot better about your car.

Chances are your car may not have looked this good before.

One last thing… Go around and clean inside all the doors, bonnet and boot as there will be residue from polishing that entered in the gaps between panels.

If you liked this post, please share it, you may help reduce the stress level of another car lover.

Also if you have a particular technique you use to repair, polish and protect your cars paint and want to share it, please leave a comment below.

I pulled a couple of comments (there’s over one thousand)

Commentor (not showing the persons name) –  Dude was using circular motions! Hope there’s no paint swirling on that beaut

Fitstopgarage.com is a participant in the Amazon Services LLC Associates Program, an affiliate advertising program designed to provide a means for sites to earn a commission on purchases made through links to Amazon.com

We use cookies to ensure that we give you the best experience on our website. If you continue to use this site we will assume that you are happy with it.Ok